August 04, 2008
Here it is, the much awaited Sleep Study. Sorry to take SOOOO long, Aviva. Some technical difficulties way too boring to go into, but mostly my own procrastination.

First, in case anyone wants or needs a refresher on the first two parts of this post -


And without further ado... 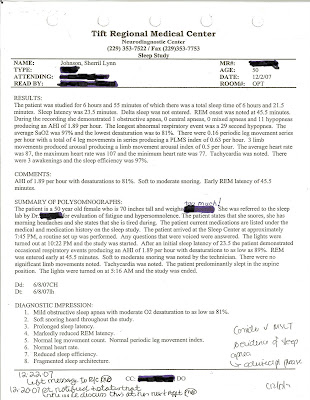 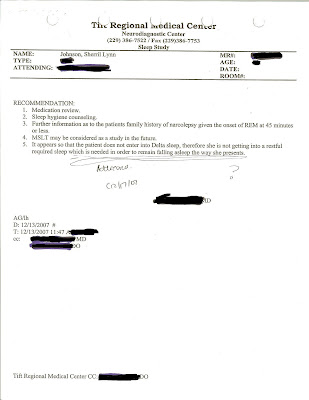 First, for the sake of comparison, this is a nice chart of how the sleep cycle is supposed to go:

Go here for another good description of the stages.

My sleep study showed that I never EVER went into delta/stage 3 & 4 sleep. This is not good. I'd go so far as to say this is very bad. And I had what is a good night's sleep, for me.

They didn't see fit to comment on the lack of delta sleep, but did suggest looking into family history of narcolepsy because I went into REM sleep after only 45 minutes. No history of narcolepsy in my family, but I seem to have a lot of the symptoms of narcolepsy, except for one major one: excessive daytime sleepiness. I do get some sleep, just not at the right time of day (night). And as long as I'm not working and can sleep whenever I'm able to, I don't feel too tired when I'm up. Seems like that might be a deal breaker on the whole narcolepsy theory to me, but what do I know?

When I talked to the P.A. at the rheumy's office about these test results, he said we should do the suggested Multi Sleep Latency Test (MSLT). Who am I to argue? I let them go ahead and schedule the test for me. Then I went home and did my internet research on the MSLT, then I called the Sleep Lab. I talked with the tech about my sleep problems and habits and she agreed that the MSLT would probably be useless for me, as I frequently don't go to sleep until 4:30 a.m. and if I went to the lab at 8:00 a.m. and they set me up to take naps all day, I WOULD take naps. We decided that that wouldn't be of much use, and that what I really needed to do was to talk with an actual sleep specialist type of doctor. Considering that, I'm unsure why I am still paying off the neurologist's $750 bill for reading the sleep study. Except that I don't want to have my credit record screwed up by him, of course.

THIS lady has narcolepsy: Open Your Eyes to Narcolepsy. I do not.

Fibromyalgia and Insomnia: Cause or Effect? from My Disability Blog (Emphasis added by me):

Patients with fibromyalgia usually have sleep disturbances during their most restful stage of sleep – the delta sleep stage. These disturbances keep them from feeling well-rested and psychologically healthy, in addition to interrupting critical tissue repair during the night. Studies have shown that insomnia in the night leads to more pain during the day and even less restful sleep the next night; a vicious cycle for fibromyalgia sufferers that is hard to end without pain medication and sleeping pills. Other studies have shown that when people without fibromyalgia were disrupted during their delta sleep stage, they developed symptoms such as achy joints and muscle pain, fatigue and sensitivities often associated with fibromyalgia. This information as left researchers wondering if insomnia is an effect or an actual cause of the disorder.

No mention of my Fibromyalgia by the $750 sleep-study-reading doctor.

From the Wikipedia definition of narcolepsy:

Four other "classic" symptoms of narcolepsy, which may not occur in all patients, are cataplexy, sleep paralysis, hypnogogic hallucinations, and automatic behavior. Cataplexy is an episodic condition featuring loss of muscle function, ranging from slight weakness (such as limpness at the neck or knees, sagging facial muscles, or inability to speak clearly) to complete body collapse. Episodes may be triggered by sudden emotional reactions such as laughter, anger, surprise, or fear, and may last from a few seconds to several minutes. The person remains conscious throughout the episode. Sleep paralysis is the temporary inability to talk or move when waking (or less often, falling asleep). It may last a few seconds to minutes. This is often frightening but is not dangerous. Hypnagogic hallucinations are vivid, often frightening, dreamlike experiences that occur while dozing, falling asleep and/or while awakening. Automatic behavior means that a person continues to function (talking, putting things away, etc.) during sleep episodes, but awakens with no memory of performing such activities. It is estimated that up to 40 percent of people with narcolepsy experience automatic behavior during sleep episodes. Daytime sleepiness, sleep paralysis, and hypnagogic hallucinations also occur in people who do not have narcolepsy, more frequently in people who are suffering from extreme lack of sleep. Cataplexy is generally considered to be unique to narcolepsy and is analogous to sleep paralysis in that the usually protective paralysis mechanism occurring during sleep is inappropriately activated. The opposite of this situation (failure to activate this protective paralysis) occurs in rapid eye movement behavior disorder.

I have experienced sleep paralysis and hypnagogic hallucination (phosphenes, the Tetris Effect and sounds). Sleep paralysis is actually a form of hypnagogic hallucination. It is by far the most disturbing form, to me. I have only had one episode in the last several years. I used to have them more often; I talked with a friend who was taking Psyc 101 at the time and she looked it up in her big book. I would really have thought they have at least mentioned the scientific explanation given on Wiki of sleep paralysis. But no, all they said was some people think the person is experiencing an out of body experience. If that idea wasn't already whizzing around in my little brain it started then, that something purely evil was trying to pull me away from my life, that if I did not wake up immediately, I would never wake up again. I guess that would be the "terrifying hallucinations" part that often accompanies sleep paralysis.

My experience with sleep paralysis was that I knew where my body was and who, if anyone, was around me, but I could not move or speak no matter how hard I tried. This compounded the terror.

This painting, "The Nightmare" by Henri Fuseli, is totally what I thought was happening to me: demonic visitation! I promise I've never consciously seen this work of art before.

The Nightmare, by Henry Fuseli (1781) is thought to be one of the classic depictions of sleep paralysis perceived as a demonic visitation.

A couple of other notes:

It seems like Tachycardia while sleeping might be something to be concerned about, too. It was also noted in my sleep study results.

Welcome to The ICIE and thank you for commenting!

Note: If you are leaving a comment on this blog in an effort to advertise anything except your own valid topical blog or website, your comment will be marked as spam and will not be posted.

Popular posts from this blog

Marisol Maldonado "comes out" of the autoimmune closet with husband Rob Thomas' hit song & video "Her Diamonds" - check it out; it's way cool 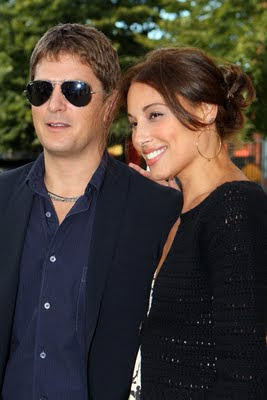 Watch the music video Rob Thomas - New Music - More Music Videos I think Marisol Maldonado has taken a very brave step, career-wise, to come out like this about her autoimmune disease. Being a model is a very physical profession and as those of us with ICI know, coming out at work, any kind of work, is a big deal. I'd like to send her a really big thank you for raising awareness of autoimmune disease in general. I wonder what the song/video title means? Her Diamonds. And she says ooh I can't take no more Her tears like diamonds on the floor And her diamonds bring me down 'Cause I can't help her now Losing her sparkle? Here's what Rob Thomas says about it: The album’s first single, the kaleidoscopic “Her Diamonds,” is the most personal song Thomas has yet committed to disc. Rob’s wife Marisol is courageously battling an autoimmune disease, and “Her Diamonds” was written “about a couple dealing with that on a day-to-day basis,” explains Thomas. “There’s an
Read more

Nerve Damage on the Vaginal Cuff After Total Hysterectomy

August 29, 2017
Here's the link to the actual article describing my experience:  https://medium.com/@SherrilLynn/nerve-damage-to-the-vaginal-cuff-after-total-hysterectomy-6d9a2e576f15 .     This has happened to me and I can find virtually NOTHING written about it, except the pain filled pleas of other women it has happened to, looking for answers as to why this has happened to them and what they can do about it.  I'm going to start a place for other women who have and are experiencing Nerve Damage to the Vaginal Cuff after a total hysterectomy (as far as I can tell there's no cure and nothing to do about it but pain management) to publish their stories here on the ICIE blog.  A collection of experiences of women who have Nerve Damage to the Vaginal Cuff (I'm going to shorten it to NDVC since no one in the medical field has deigned to give a name to this diagnosis), after a total hysterectomy.  I'm pretty sure there are quite a few of us out there but no one has counted so who k
Read more 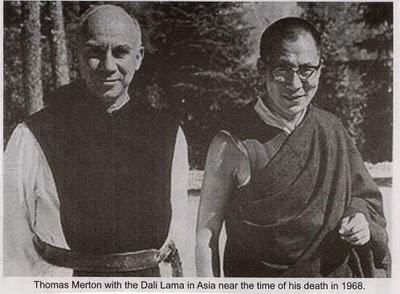 A prayer for Sunday's post seems appropriate. Although I'm getting this post out so late that subscribers might not get it until Monday. Speaking of Monday, I have to have a root canal tomorrow. I forgot about that when I decided to try NaBloPoMo again. I'm not going to try to post tomorrow, which takes me out of the NaBloPoMo competition. I'll have to see how the root canal goes before I decide how often I'm going to try to post for the rest of the month. This Prayer for Peace was written by Thomas Merton , read in Congress on April 18, 1962 and placed in the Congressional Record. It was at the request of Frank Kowalksi, Congressman from Connecticut.  In 1962 the Vietnam War was happening, but it seems to be totally applicable here and now.  It also seems to me that it's a prayer that might be accepted by most religions. What does this have to do with chronic illness, you might ask?  I'll tell you what I think about that at the end of this p
Read more